It was a restless night. I was awake for what felt like most of the night, still energized from my experience on the train earlier, and excited about the following day’s adventures. When morning did come, I wasn’t tired. We got ready and headed to the 7-11 down the street to get some waters and snacks for the day ahead.

While we were dead set on going to Taroko, we still weren’t entirely sure how we’d get there. In all the other countries we went to, an international drivers license wasn’t needed and there were practically no road laws. Every website and forum online stated that we would need one for Taiwan if we hoped to rent a motor bike. Undeterred, we decided to try our luck anyway and hope for the best. We decided our best option would be to go back to Hualien Station (just one stop from Ji’An, and the hub to go to Taroko) and talk to some of the vendors offering motorbike rentals. As it turned out, some of the vendors were willing to rent motorbikes to foreigners without an international drivers license…for a severe upcharge. That was until a friendly man named Paul handed us his business card and gave us a great deal. Transport to and from Taroko? Check!

We filled up with gas, got breakfast at the Aqua Cafe, and headed out. It was just under an hours drive to the National Park. For the last 15 minutes of the drive, we could see the fog covered mountains that awaited us. We stopped in at the visitor center to grab a map and were informed that there had been a lot of rain the night before and most of the trails were closed for repair, but we would be allowed to take the scenic 45 minute drive through the park. I would have been slightly disappointed had the drive not been one of the most spectacular moments of my life. Truly one for the books.

The vines I saw on the train ride were within touching distance from my head. They hung down from the thick foliage surrounding the road. I don’t think I could have counted all the waterfalls if I tried…I guess that rain storm was just preparation for an incredible showcasing of mother nature. Large tour busses struggled to round the tight corners and squeeze through the water dripping caves. Definitely rent a motorbike if possible. We were able to see so much more of the park being on our own rather than with a tour group. Plus, there really is something magical about driving through leaky caves getting splashed with water.

We spent several hours taking in the serenity of Taroko before heading back to town. We returned the bike, grabbed a pizza, and made some chaotic plans to get back to Taipei in time for our flight tomorrow. We would be leaving at 7:30am, and getting to Taipei way too early, but all the other trains were sold out, and better to be too early than too late. Our next adventure would take us to our last country before heading back to the United States. It was bittersweet, but Taiwan had given me some incredible experiences and growth. I am so thankful. 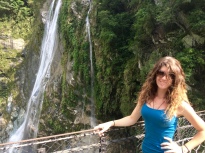